ENQUIRE NOW
CHECK AVAILABILITY
REVIEW PHOTOS
[vtab]detailedaccom[/vtab][sort][/sort][pgsize]1[/pgsize][db]sql[/db] 0 0 [acode]15318[/acode]
Camps Bay Retreat Description
Camps Bay Retreat 5 Star Boutique Hotel is a sanctuary for the soul, set on four acres of lush green nature reserve. With a mountain meditation pool, thickets of trees, waterfalls and streams, it is a peaceful paradise, where meditative moments are waiting to be had. Views stretch across the ever-changing Atlantic Ocean and along the peaks of the Twelve Apostles Mountain Range, from the Deck House and The Villa. The estate has features such as four swimming pools, a tennis court, a spa and a fine dining restaurant. Dine in the old world splendour of the original manor house, where The Retreat Kitchen’s executive chef creates a daily menu of gourmet fare, combining a symphony of fresh ingredients from local markets. Food is paired exquisitely with celebrated wines from the region, best experienced as part of a candlelit three course affair! Spoil yourself with a choice of massages, treatments and facials at the spa. Spend the day luxuriating in the spa, relaxing in the sauna and being revitalized with a deep massage. A refuge for the body and a haven for the mind, you’ll unravel and surrender to the tranquility.
AREA INFORMATION
Camps Bay Retreat is located in the Glen area of Camps Bay, Cape Town. The estate borders Chilworth Road on the mountain side, Victoria Road on the ocean side, as well as the Cape Peninsula National Park. Camps Bay Retreat is within walking distance of Glen beach, Camps Bay Beach and Clifton.
Camps Bay Retreat Directions
- Exit Airport Direction N2 Cape Town, and as you approach the city, follow the N2 CITY, FORESHORE, SEA POINT signage. - Follow N2 Stad/City signs until you arrive at a large intersection with several sets of traffic lights (Coen Steytler Avenue) The CTICC is on left hand side (+-22 kms) and the V&A Waterfront on your right hand side. - Proceed straight ahead along this road (M62) following the TABLE MOUNTAIN CABLE WAY/ CAMPS BAY signage. - The road follows a steep and winding ascent to the top of the hill (Kloof Nek). Without turning towards the Cable Way, descend straight into Camps Bay. - Take the second road to your right, Geneva Drive and follow its winding descent - Turn right into the 5th road, Sedgemoor Road, and straight over a stop street (Berkley Road) - Chilworth Road is the very next road to your right. Turn right here and Camps Bay Retreat is 100m down the road on the left hand side. 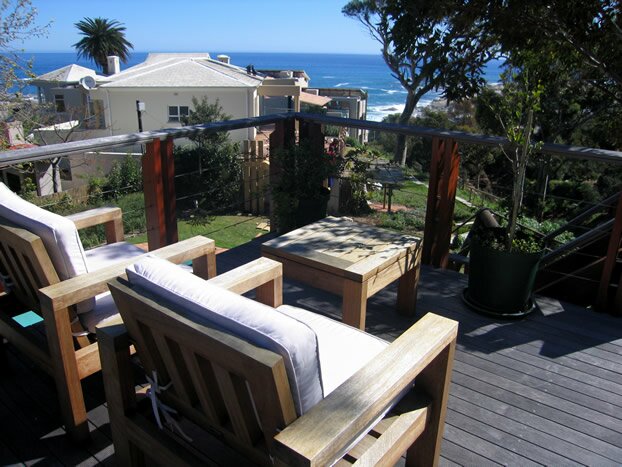