ENQUIRE NOW
CHECK AVAILABILITY
REVIEW PHOTOS
[vtab]detailedaccom[/vtab][sort][/sort][pgsize]1[/pgsize][db]sql[/db] 0 0 [acode]15315[/acode]
De Waterkant Village Description
Colourful De Waterkant Village is a unique European influenced village of semi-detached quaint cottages and cobbled streets preserved from the 1760’s. Cradled between the city and the Waterfront, De Waterkant Village is avant-garde, a cultural urban refuge highlighted by the abundance of restaurants, art galleries, gay clubs, salsa clubs, tapas bars and Parisian inspired café’s. Famed for being a gay friendly hub, the village is within walking distance of bars and fashionable nightspots. Drawing comparisons from cultural and artistic villages from all over the world, De Waterkant embraces individuality and theatricality, echoed in the architecture and vibrancy of its residents and visitors. Walking on the beautiful sidewalks, one cannot help but be caught up in its spell, cast by the beauty of the Dutch, Georgian and Asian influenced architecture, with flower boxes under the windows, sprawling balconies and rooftop decks providing exquisite views and majestic old trees that line the streets, filtering the sun selectively through their branches. This is a place that will tempt you into its fold and dare you to indulge and delight in life’s finer pleasures.
AREA INFORMATION
De Waterkant Village is tucked between Table Mountain, the CBD and the V&A Waterfront. Most cottages, guest houses and apartments in De Waterkant Village boast views from Asian inspired roof top terraces, that sweep all the way down to the Waterfront and across to Table Mountain. The mixed Georgian, Cape Dutch and Asian colourful architecture, cobbled streets and historical standing is what makes De Waterkant Village so unique. De Waterkant is often described as being arty, charismatic and quaint and is a truly special place decorated with gorgeous al fresco restaurants, sidewalk cafés, boutiques and bars and is often compared with Greenwich Village.
De Waterkant Village Directions
De Waterkant Village is located in De Waterkant, roughly situated between Signal Hill and the Waterfront, between the CBD and Green Point. Arriving from Cape Town International Airport directions De Waterkant Village is located in De Waterkant, roughly situated between Signal Hill and the Waterfront, between the CBD and Green Point. directions Exit Airport Direction N2 Cape Town, and as you approach the city, follow the N2 CITY, FORESHORE, SEA POINT signage. directions Follow N2 Stad/City signs for 22km¹s until you arrive at the Coen Steytler Avenue traffic lights. The Cape Town International Convention Centre is on your left hand side and the V&A Waterfront on your right hand side. Proceed straight over the intersection. directions. Cross over one intersection and at the second traffic light, Somerset Road, turn right. In Somerset road take your third left into Napier Street (Corner of Spar)Take your second left into Waterkant Street and continue until The Charles, 137 Waterkant Street – corner of De Waterkant and Dixon Street (it is opposite the famous Manhattans) 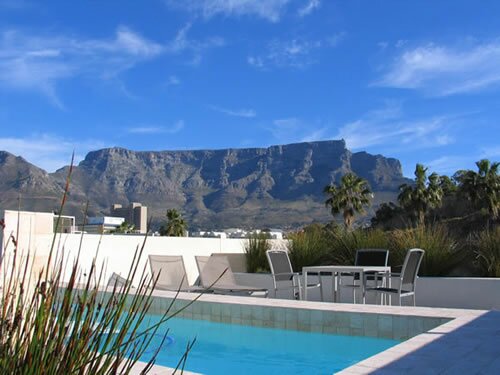